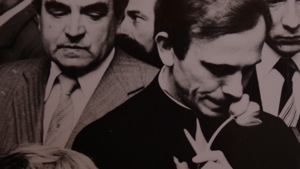 On the Amar circus ring, in 50 years, Jeannette Mac Donald was at the height of his glory. It is one of the first women tamers to present a number with ten caged lions. White silk blouse, black boots polished and white gloves, she fascinated the public as much as his wild animals. At the time, Pierre Lartigue, founder of Cirque du Grand Toulouse, reports: "She was really beautiful and we did not know if there were ten or eleven lions, as she appeard to be a wild animal with her tawny body." ... Daughter of a showman tamer, she was born May 3, 1918, in Montrouge. She was 6 years old when his father brought for the first time in the cage of lions. She was 15 when she presents her first public number. It will foam the cities of France with its circus temp. This mountebank of life until the lead in North Africa, where a day in 1967, her circus temp burns. Jeannette loses everything. Remain only her animals. Jeannette MacDonald moved to Easter 1973 with her last animals to Buzet-sur-Tarn (Haute-Garonne). She lives 25 years in miserable conditions without water or electricity. Before knowing the ultimate misfortune, with the burning of the caravan where she lives. This great figure of the track, which had always predicted it "would not survive the death" of his last lion after a outdoor life, is in a nursing home. Jeannette MacDonald died on 1 May 1999, with a small stuffed lion on the heart.